Ackermann is a manufacturer of liturgical outfits and apparel for use by members of the clergy. We stock everything that is required to make up the wardrobe of a priest, deacon, or bishop. Providing high quality and beautiful garments that are steeped in ceremony and symbolism is an area we excel in.

History of the Liturgical Cope

Several of the pieces worn by members of the clergy are steeped in history and meaning. Even if the physical materials themselves are relatively new, the designs and shapes of the clothing represent meanings from years gone by. The Liturgical Cope is a beautiful garment. It is a type of ecclesiastical vestment worn by all members of the clergy when assisting at non-Eucharistic liturgical functions.

The liturgical cope is usually made from silk or other fine materials and is often brightly coloured, featuring a long cloak or mantle. Notably, it does not feature a hood. In its place is usually a decorative shield of embroidery. The cope is open at the front and is held together at the chest. The cope has been in use for many centuries within the Church. First seen in the eighth century, it was widely adopted from the twelfth century and has been used ever since.

This middle-aged garb has been featured more recently—since the late seventies and the pontification of Pope Paul VI, gracing the shoulder of the new popes during papal inaugurations. The cope has largely replaced the papal mantle, a similar garment that has fallen out of use.

The cope could have several origins, being called a cappa or a pluvial in Latin, meaning “cape”, or “raincoat”. Some people believe that it may have evolved from the humble choir cape, a black cape worn by members of the choir. Either way, it was eventually picked up by dignitaries who adorned the capes with fine embroidery and bright colours. After a time the liturgical cope was regarded as a vestment and cycled into use in the ceremonies of the church.

Throughout the year, the vestment can have many designs and colours; the colour often can reflect the occasion or the time of the liturgical calendar. A varied array of liturgical copes exists today, from Gothic to traditional Roman to more contemporary designs.

As mentioned, copes have been used in papal inaugurations for a while. In some cases, old papal mantles were converted to copes on request. Copes have been known to be featured on angels across Catholic artwork. One of the most notable appearances is a grand red cope adorning the Angel Gabriel in The Annunciation, painted by Jan Van Eyck in the fifteenth century.

Ackermann Copes—Tradition In The Present

The liturgical cope is worn at a variety of celebrations and has been for a very long time! A prepared clergy member will always have at least one to hand to ensure they’re always ready for the celebrations of the Church.

At Ackermann, you can expect to find a wide array of priestly outfits with designs ranging from the newer contemporary to the stark and traditional. We carry everything from chasubles to dalmatics, copes and vestments, cassocks to cottas and mitres to humeral veils. Whatever you need, we’ll have you covered. 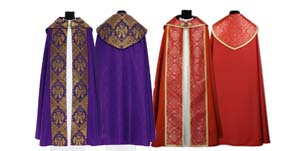 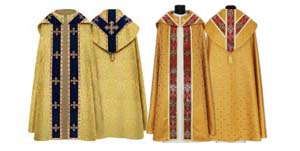 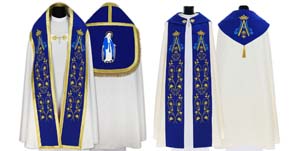 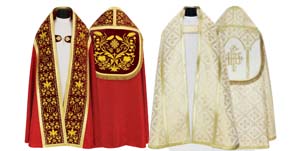