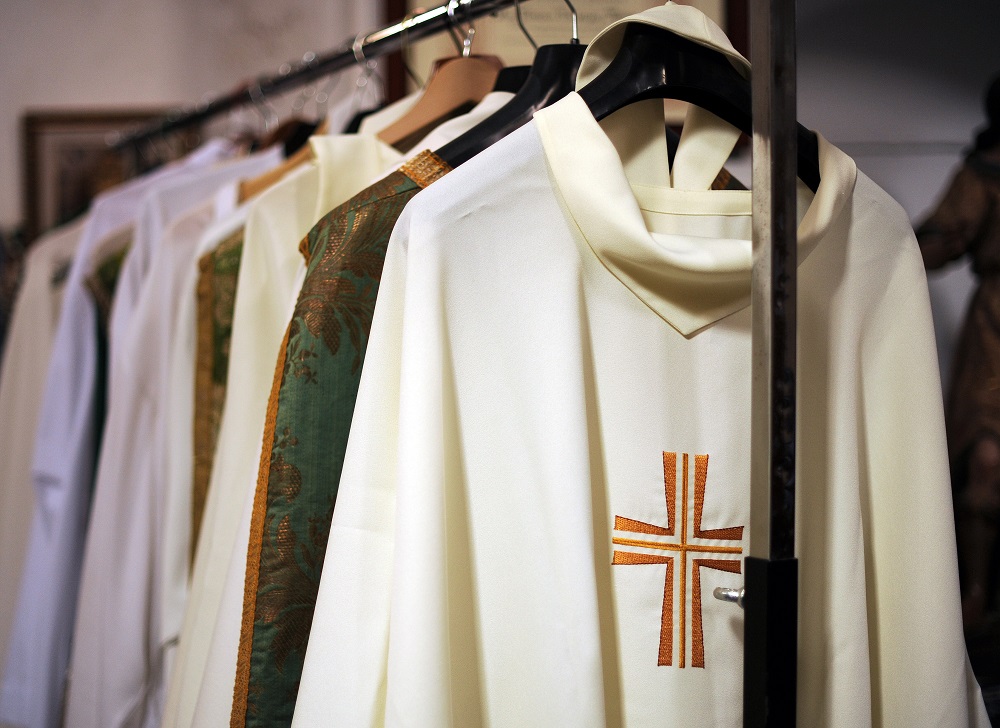 Ecclesiastical vestments are the vestments that are to be worn by the clergy when performing the ceremonies of the Church's services, most notably the celebration of the Mass, followed by the administration of the sacraments, blessings, solemn recitation of the canonical hours, public services of prayer, processions, and so on.

Nonetheless, the notion of wearing specialized clothing for liturgical rites impacted the Church. Following the founding of Christianity in 313 A.D., the Church refined "who wore what when and how" until approximately the year 800, when liturgical norms for vesting were practically standardized and remained so until the renewal following the Second Vatican Council. The priest still wears the amice, alb, cincture, stole, and chasuble when celebrating Mass.

The liturgical garments have changed dramatically since the Church's inception till the current day. There is as much difference between the vestments worn at the Holy Sacrifice in the pre-Constantinian period and those presently worn at Church services as there is between the ritual of the early Church and that of modern times. The current liturgical vestments, like the rites that accompany the performance of the Sacred Mysteries, are the result of a lengthy evolution.

In the evolution of Christian priestly attire, four major eras may be identified. The first refers to the time before Constantine. In terms of form and ornament, priestly attire did not yet differ from secular attire. At the Church's offices, ordinary clothing was worn. Better clothes were presumably utilized in times of peace and familiar surroundings, and these were notably saved for the performance of the Sacred Mysteries.

The second phase spans the years roughly from the fourth to the ninth centuries. It is the most significant period in the history of liturgical vestments. This epoch produced priestly clothing in a specific sense and determined the primary vestments of the current liturgical dress.

The development process that was completed during this period includes five essential elements:

The poenula (coat or mantle) and the long tunic, which came into general use in the third century and were also worn in the offices of the Church, were progressively superseded in daily life, beginning in the sixth century, by the shorter tunic and the more practical open mantle. The Church did not partake in this return to the previous trend but instead kept the existing clothing, which was more appropriate to the majesty of the Divine services; this fact alone was the beginning of a unique priestly garment.

The third era, which lasted from the ninth to the thirteenth centuries, saw the completion of the creation of priestly vestments in Western Europe. The chasuble, stole, and maniple were no longer worn by the acolytes. The tunicle became the normal vestment of subdeacons; the chasuble became the exclusive vestment worn during Mass, as the pluvial, or liturgical caps, took its place at other events. Another, more recent vestment is the surplice, which first appeared in the eleventh century and gradually began to supplant the alb.

The history of liturgical vestments in the fourth era, from the thirteenth century to the present, is almost completely the history of their rubrical progression, decoration with needlework and ornamental embellishments, and the nature of the material from which they are fashioned. In general, the fourth period's inclination has been toward the greater richness of material and adornment, but also toward greater convenience, resulting in a continually growing shortening and fitting to the figure of the vestments, inevitably degrading the shape and aesthetic efficacy.